Hi Guys! I am super duper excited to finally be able to write this post! I had two major sewing goals this year: to sew an Archer button up and to make jeans. I am thrilled that I can say I’ve achieved both goals! Both seemed like such big projects that they took sewing dares to make me actually start the process. And I was pleasantly surprised with how much I loved sewing both of  them. I can easily see how people get hooked on shirt making and jeans sewing. My sewing dare for the jeans was from Heather and I finished them the day before my deadline of the end of August. 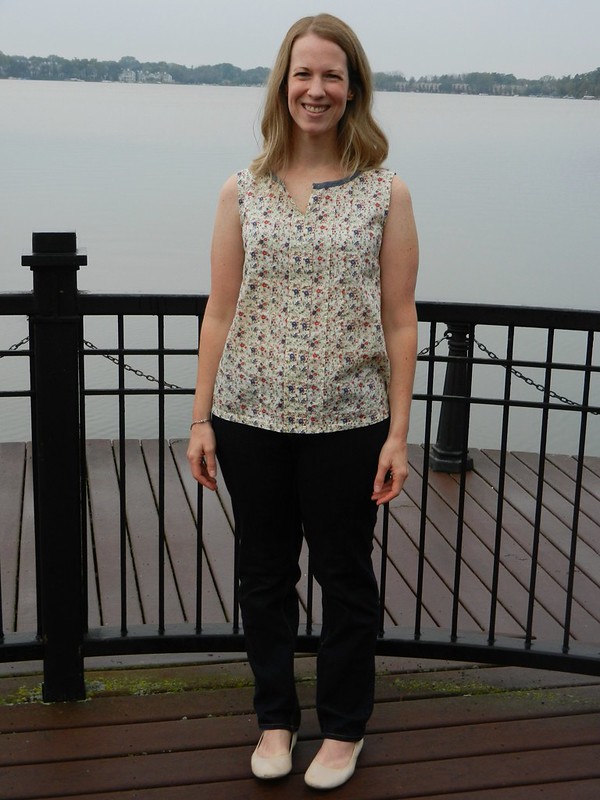 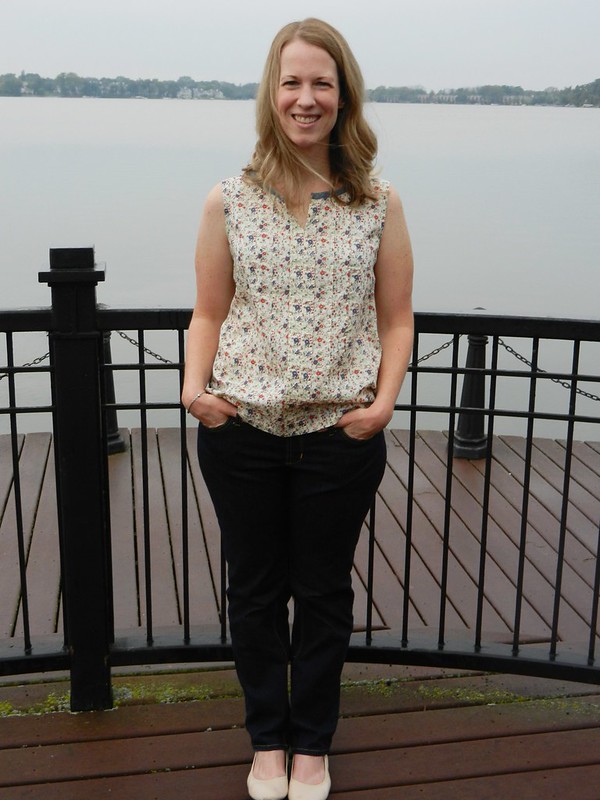 I went with View A of the Ginger Jeans pattern. This is the low rise, stovepipe leg version. I bought this pattern ages ago when Kollabora had a 20% off sale. I have some of the Cone Mills denim from the Ginger Jeans kits that Heather sold earlier in the year, but I didn’t want to use that for my very first attempt at jeans. This denim is from Girl Charlee and I bought it at the beginning of the year. I don’t think they have this exact denim right now, but they do have some other options that look good. I made a size 14 graded out to a 16 at the hips. The only change I made to the pattern before cutting was to add 1/2″ to the center back of the yoke and taper it to nothing at the side seams. I like my jeans to be higher in the back and dip down in the front. I wasn’t sure if that’s how the pattern was drafted but I figured I could always remove the 1/2″ if I didn’t like it. I also ended up having to cut the waistband with a center back seam since my denim was a little bit too narrow for the whole thing to fit. 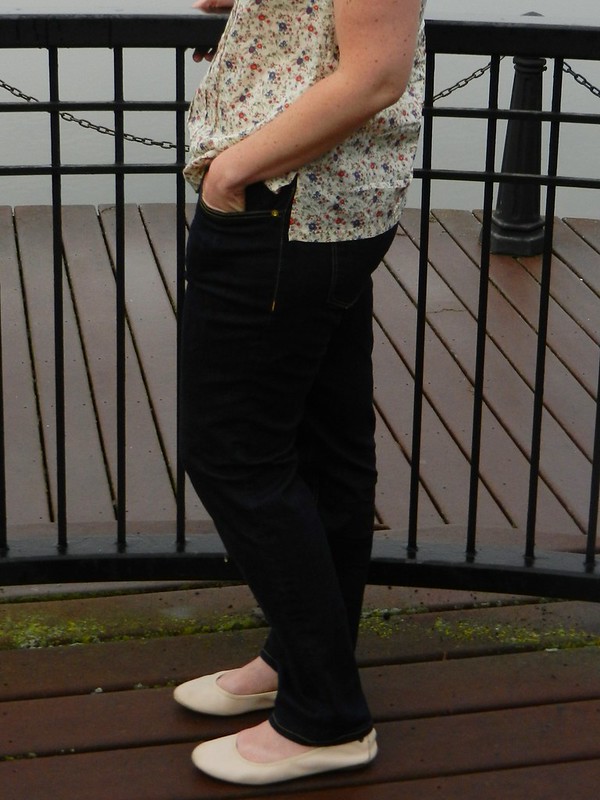 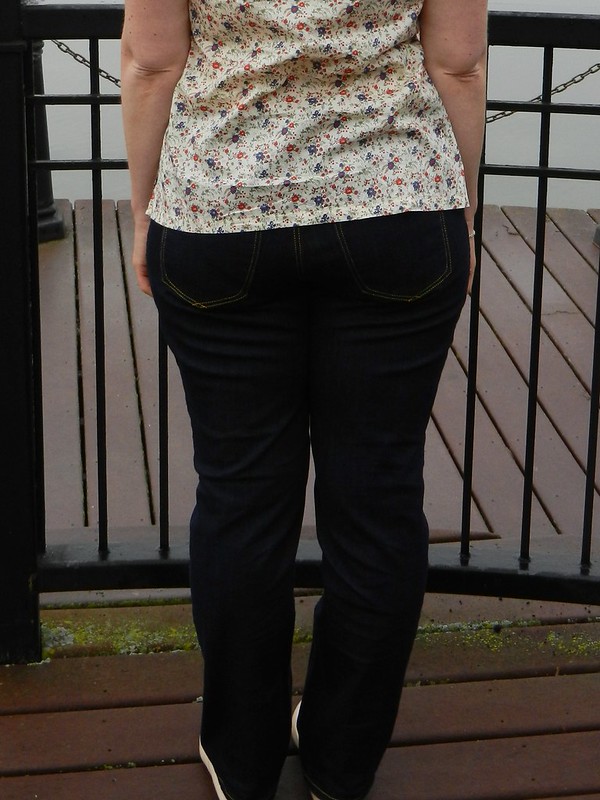 I cut everything on the single layer as Heather recommends in her Ginger Jeans sew along. Once I had everything cut out I basted the jeans together for a fit check. Remarkably, I was mostly happy with the fit. I had a bit of looseness/bagginess at the crotch, which is fairly common for me. I posted a picture on Instagram and many wonderful sewing people came out with their recommendations of how to fix the issue. I straightened the crotch curve a little bit, which mostly solved the problem. I also had gaping at the back yoke/waist. I ended up solving that by taking a 2″ wedge (1″ on each side of the center back seam) from the waistband and tapered it down to nothing just above the end of the crotch curve. 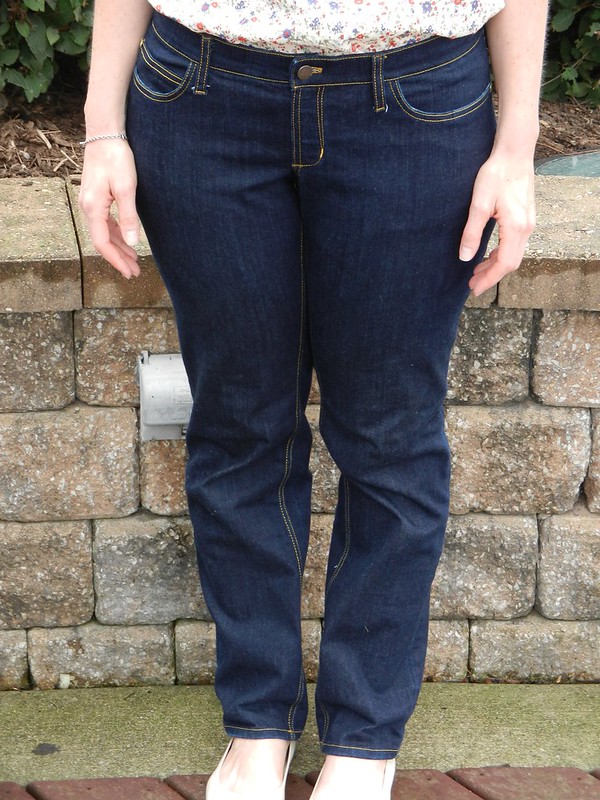 Once I got to doing my actual sewing I really started having fun. I started out using just my regular sewing machine, but after a while I dragged out my auxiliary machine to I wouldn’t have keep switching from regular thread to top stitching thread. I was able to go a lot faster once I did that. (I know not everyone has stolen their mom’s sewing machine and therefore has access to two machines– these jeans are totally doable with just one!) 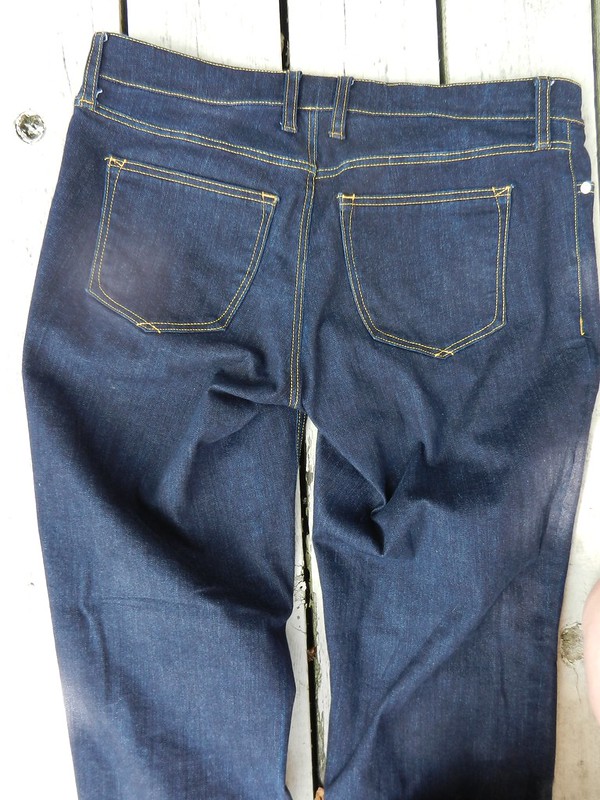 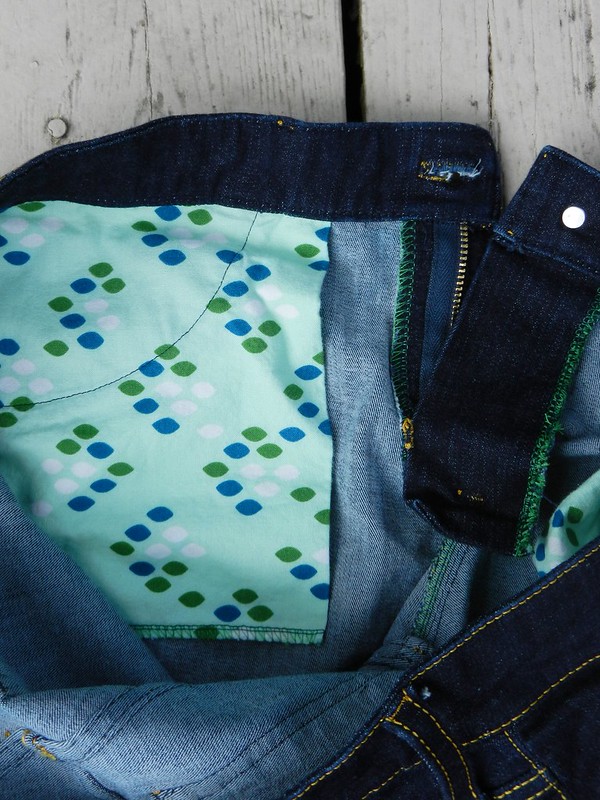 I went all out and flat felled the yoke seam and the inner leg seams. I used some leftover Cookie Book fabric  for the pockets (because I wanted my jeans to match our bedding!) and decided to finish my non-flat felled seams with kelly green serger thread. I finished the outer leg seams separately (instead of serging both seam allowances together as one) which is how my ready to wear jeans are finished. I love the effect of the two rows of green stitching when the jeans are cuffed. 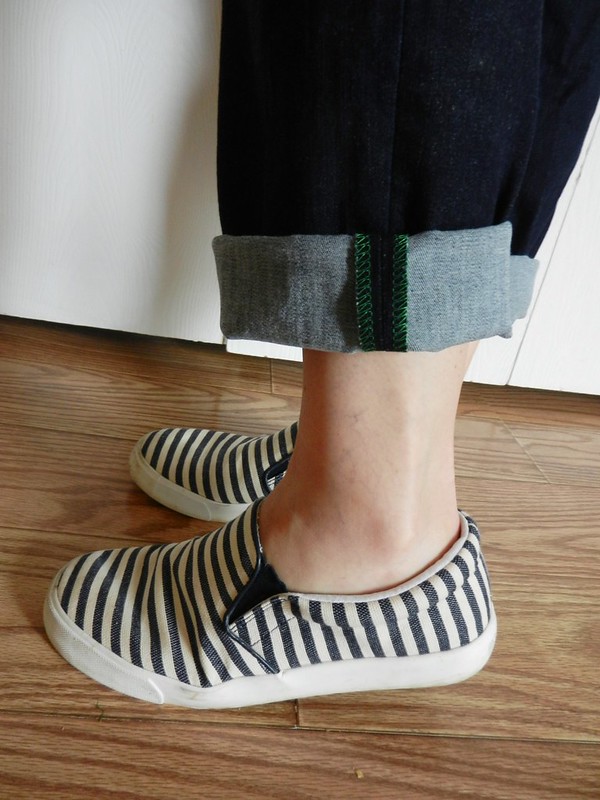 I am really pleased with the fit of these jeans. When I was working on my pocket placement I had my husband take a bunch of pictures of my backside. (Scrutinizing my bum was probably my least favorite part of this whole process!) I had him take pictures of my favorite Gap jeans and I was pretty horrified with the pocket placement on them. The pockets were set so wide that they make my generous backside look even wider than it already is. I don’t know that I’m ever going to look at my butt and say, “Wow!” But I think these jeans are a major improvement over the ones I’ve been wearing. 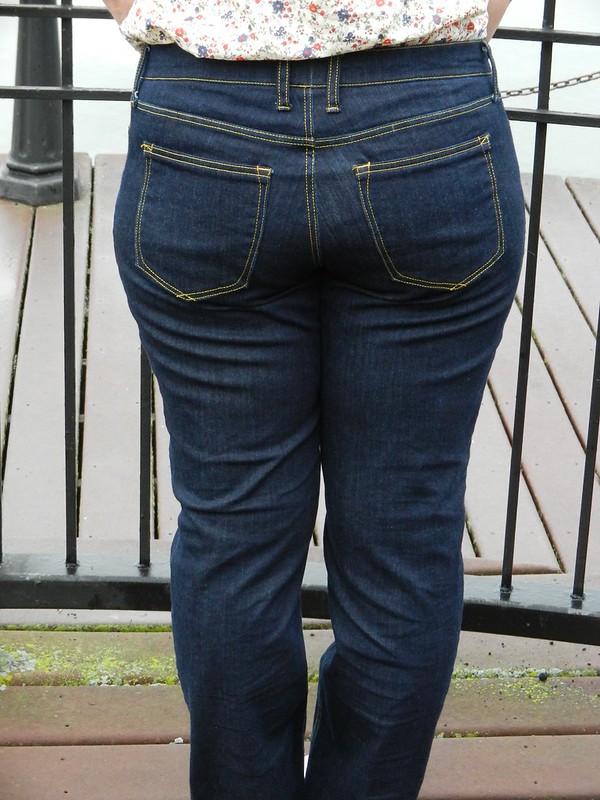 The only issue I had with sewing these was that because I had to cut the waistband in two pieces I had too much bulk in the center back to position the beltloop directly over the seam join. I wanted to cover it with a belt loop, but I could not get my machine to sew the bartack on the top of the loop. I decided to add a belt loop and put one on either side of the center back waistband seam. I was nervous about installing the button and the rivets, but it wasn’t too bad. The button did pop off these jeans right after my husband took these pictures, but I hammered it back on and I think it’s more secure now. I found the Ginger Jeans sew-along to be invaluable for sewing my first pair of jeans. I can’t imagine how much time Heather put into her detailed posts. 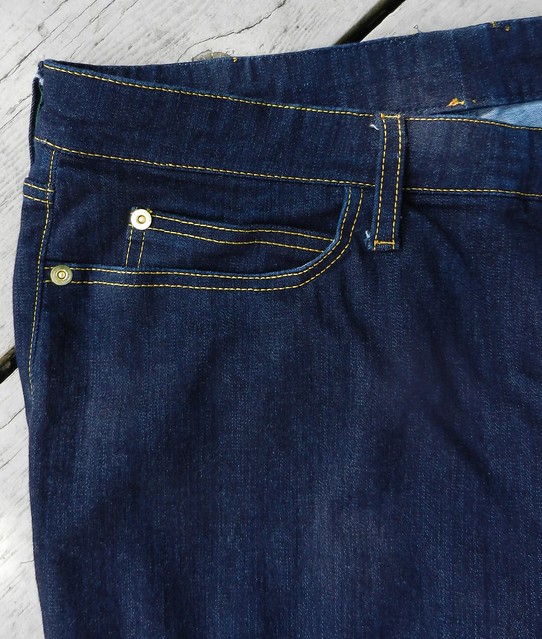 I haven’t really had a chance to wear these much since I made them because our temperatures have been in the 90s for the last week. I am excited for Fall weather to set it so I can wear these and see if there are any changes I want to make before I start my next pair. I want to try a skinny leg variation but with the low waist of this view so I may try that next.

Did anyone else set sewing goals for the year? How are you coming along on them?

p.s. Based on Gillian’s challenge in her recent Better Pictures Project post, I decided to try a new location for my photos. After we did the pre-school drop off, my husband, Caroline, and I went to the lake and took these photos. The weather didn’t cooperate at all for us– it was so overcast, humid, and gloomy. My curls died a slow death and it’s sort of hard to see details on this dark denim. I want to try again at this location on a less gloomy day, but I was too excited to post about my jeans to wait and re-take these  photos.