Hi there! I waited until the last few months of the year but I’ve finally started working on the list of sewing goals I set for myself at the beginning of the year. Hot on the heels of making my Waver jacket I decided it was time to tackle another pair of jeans. I really wanted to work on pants fitting this year and I’ve managed to completely avoid it (other than amassing patterns and fabric which have been sitting untouched.) I decided to start with a pair of Closet Case Patterns Morgan boyfriend jeans since I love the look of boyfriend jeans but it’s a struggle to any that fit me in ready to wear. 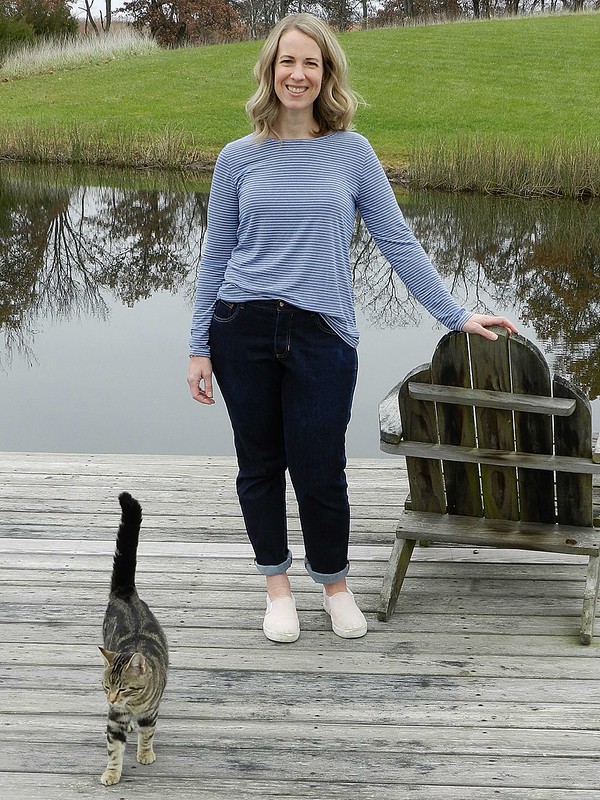 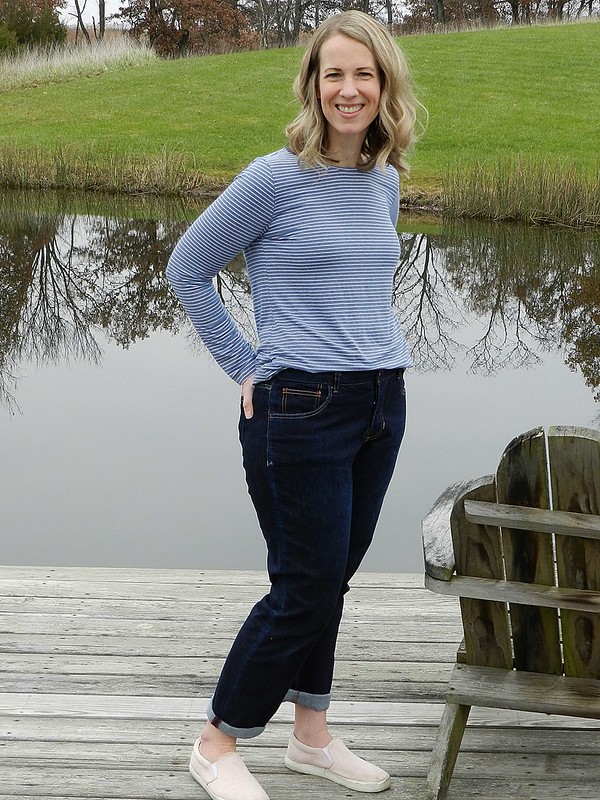 The Morgan jeans are designed for non-stretch denim, but it has been eons since I’ve worn non-stretch denim and I’m not sure how I’ll like wearing it. For my first pair of Morgans I used the same fabric that I used to make my Gingers, which is a stretch denim I got ages ago from Girl Charlee. I decided to go down a size from my measurements because of the stretch fabric, so I made a 12 at the waist graded to a 14 at the hips. I lowered the front rise by 5/8″, did a 3/8″ knock knee adjustment, and darted out 3/8″ in the back yoke. After basting them together I was mostly happy with the fit, other than having some excess fabric at the crotch. I didn’t have gaping at the waist and I was curious if I would have been better off with the original yoke. I cut new yokes without the darts and I ended up liking how they fit that way. One thing that I didn’t pay enough attention to was that they were snug in the waist. For some reason I thought they would be fine (probably because I usually deal with a snug fit in the bum and too big at the waist) but they remained snug even after I sewed them all together. (Imagine that!) 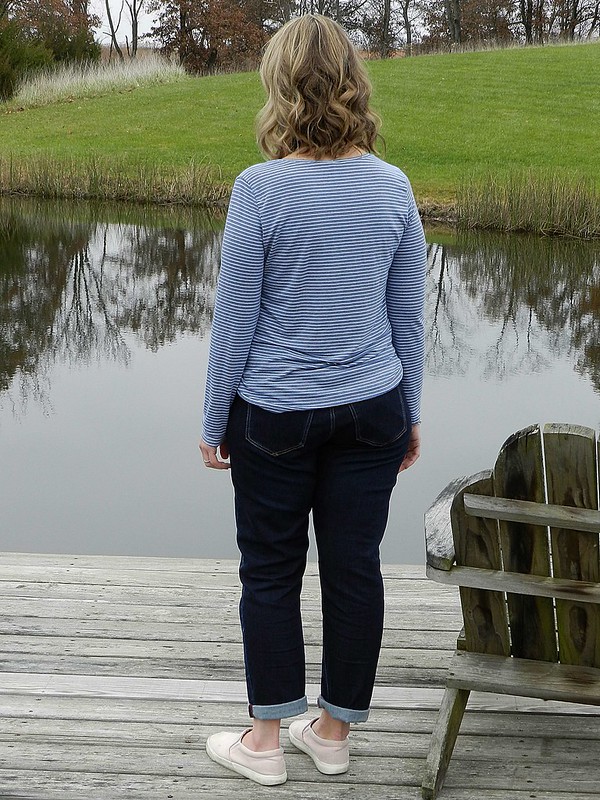 I am really kicking myself that I didn’t use a smaller seam allowance in the waist/pocket area. I think if I’d sewn them at 3/8″ instead of 5/8″ the fit would be so much better. I also interfaced the waistband, which I think was a mistake since it really doesn’t have any give now. I am able to wear them, but on my next pair I will pay much more attention to the fit at the waist than I did on this pair. 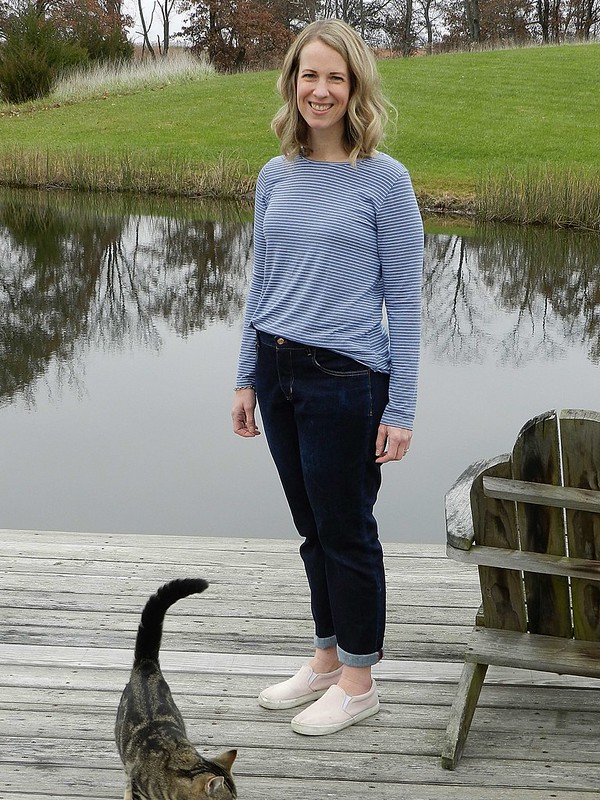 I straightened out the crotch curve to help with the fit. I have looked at Heather’s 14 common jeans and pants fitting adjustments blog post about a million times. I did the flat pubis adjustment which worked pretty well on my Ginger jeans. I didn’t entirely solve the crotch fit on this pair. I still feel like I have some excess fabric and a different set of drag lines than I did initially. I need to lower the rise a little more and play around with crotch length when I make this pattern again. I really can’t figure out if I need to lengthen or shorten the front crotch but I think I’ll start with lengthening since it’s a whole lot easier to cut off excess fabric than it is to add fabric after cutting. That is one really obvious epiphany that I had while making these. I should have added some length to the back crotch because I’ve got pulling under my bum that I think would be solved with a little more fabric back there. I don’t know why I didn’t do that at the cutting stage since I have the same problem with my Gingers and my Emerson pants and probably every other pair of pants I’ve ever made or worn. 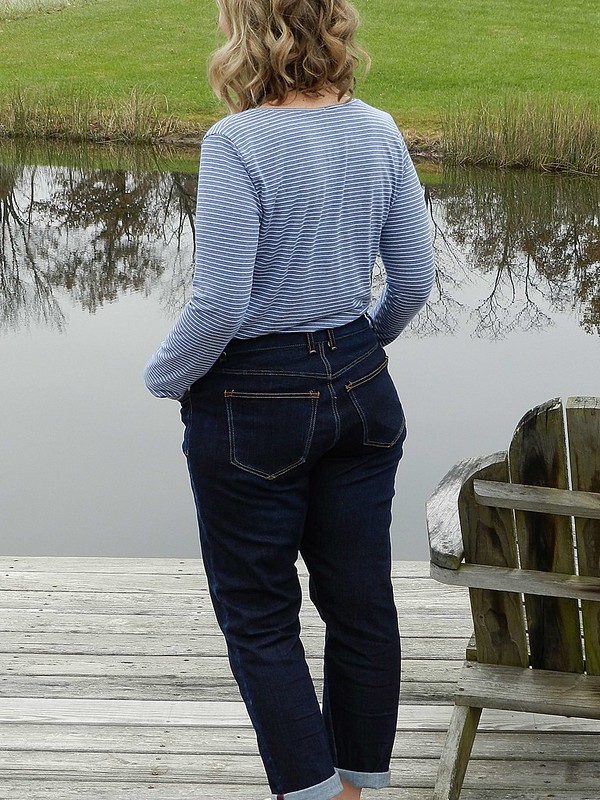 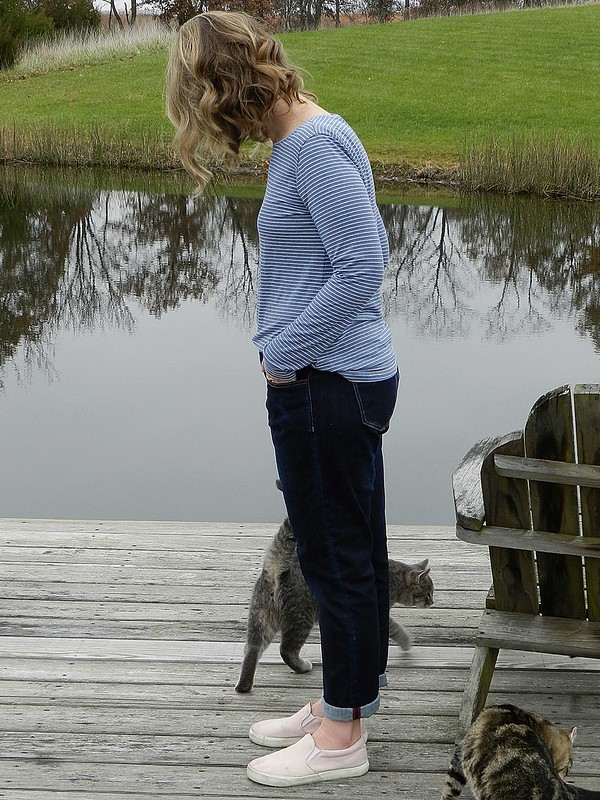 I have a bunch of knee wrinkles on my Gingers that stem from my knock knees. I made a slight adjustment on these for it (also using the method on Heather’s jeans fitting blog post) and I think I could stand to increase the amount of my adjustment next time. I can tell that there are less drag lines around my knees than usual. I don’t know that anyone else has ever given my knee wrinkles much thought but I love learning how to make fixes for these quirks that are specific to my body. 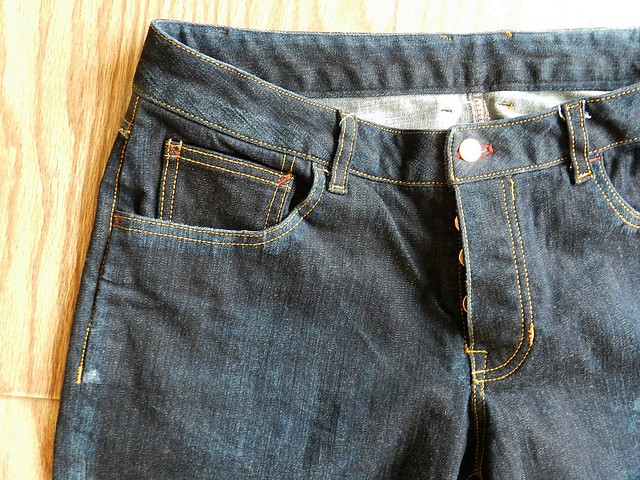 I copied the topstitching on my favorite jeans that I’ve been wearing for at least the last 10 years. I never noticed that they don’t have any rivets, just bartacks. I decided to try that for these jeans and I made the bartacks red for a pop of color that was inspired by Heather Gibson, the queen of sewing jeans! I also used red thread in my loopers on my serger and made a red button hole. I like seeing the red on the outer seams when I roll up the jeans. I used Cotton + Steel checkers fabric leftover from my Waver jacket as the pocket lining, which I think looks pretty fun next to the red serger thread. 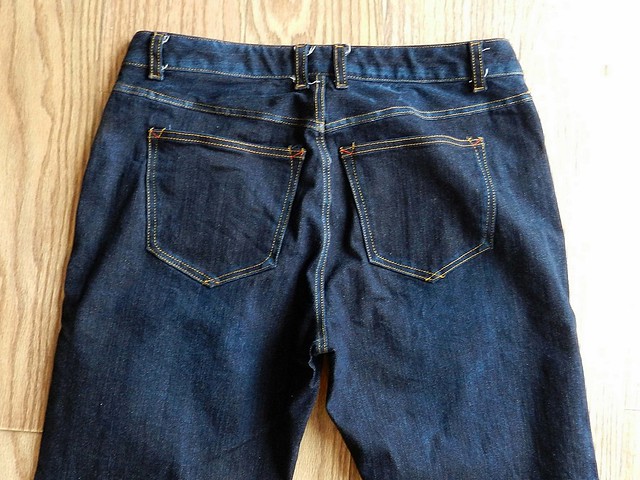 One word of advice– listen to the pattern instructions about the button placement on the fly. (I loved constructing the button fly, by the way!) I initially had them too far into the middle of the button placket and when I did them up the fly was gaping open. I had to pry all of the buttons off and move them over to get the fly to close nicely. I used the darning stitch on my machine to close up the other button holes and thankfully it’s barely visible since the denim is so dark. 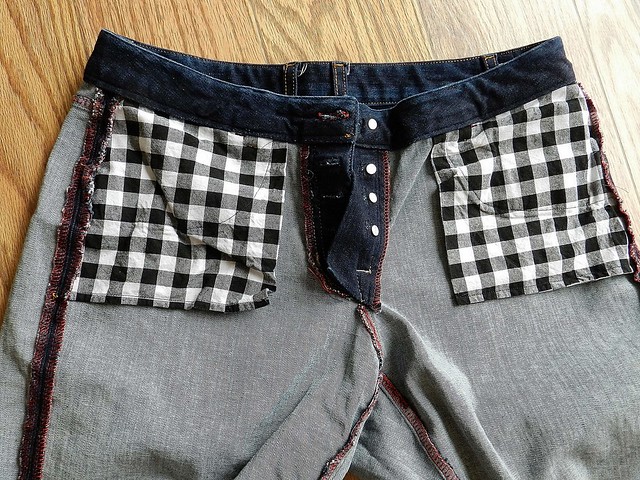 So, all in all, I am wearing these jeans and hoping they keep me from overeating during this holiday season (although that was totally not successful at Thanksgiving, which was the day that we took these pictures. These are taken at my aunt and uncle’s home in Carthage, IL. They have an absolutely gorgeous house on a lovely piece of property so I couldn’t resist taking some blog photos there. Their cats were excited to get in on the action, too!) I am excited to get to my next pair to try to improve a bit on the crotch fit but mostly to give me a little more breathing room at the waist. I may even be brave and try out the length of non-stretch denim that’s in my stash!