Hey Everybody! Did any of you do any sewing last week when it was Selfish Sewing Week? I knew I wanted to sew something but I didn’t really go into it with any big plans. I had been wanting to make the Fen dress since the pattern was released and decided that last week was a great time to finally get the pattern from Indiesew. 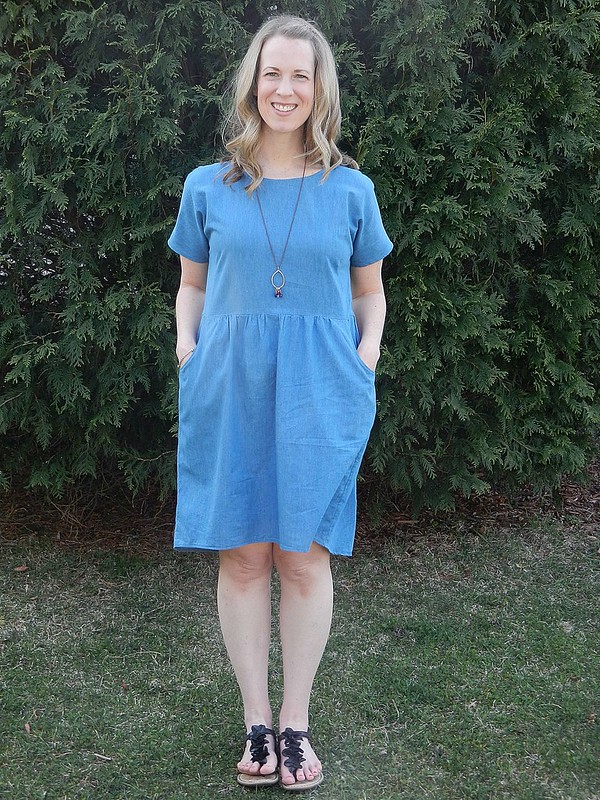 I had a few reservations about this pattern based on my forward shoulders and my pear shape. I wasn’t sure if it was going to end up looking like a sack and I’m never exactly sure how to do a forward shoulder adjustment on a kimono sleeve. I found this tutorial for how to do the forward shoulder adjustment and I tried to use that method. I kind of ran into a problem with the fact that the shoulders on the Fen dress are curved and the shoulders of the pattern in the tutorial seemed to be more straight. I couldn’t manage to draw new angled lines that looked right and kept the shoulder curve. I decided to extend the entire shoulder of the back piece by 3/4″ and cut off 3/4″ from the shoulder of the front piece. I knew that I would end up with the seam a little bit forward on my arm where the shoulder transitioned into being a sleeve but I decided that was fine. 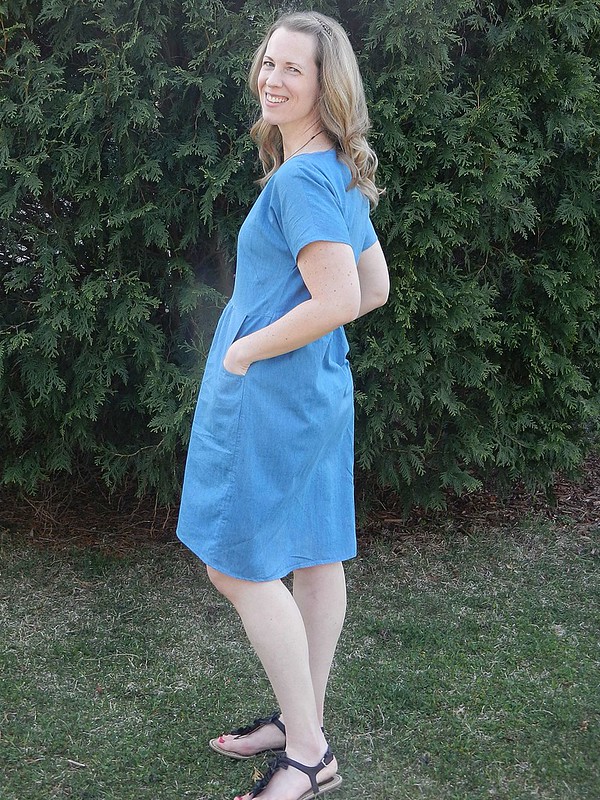 I made a quick muslin of the bodice only, because I wasn’t sure what size I should cut. I first made a 10 graded to a 12 at the waist but it seemed too big. So I cut my final bodice at an 8 graded to a 10 and then graded out to a 14 at the hips. I decided to sew the dress with 1/2″ seam allowances instead of 5/8″, just to give me a touch more ease. I also lengthened my bodice by 1/2″. 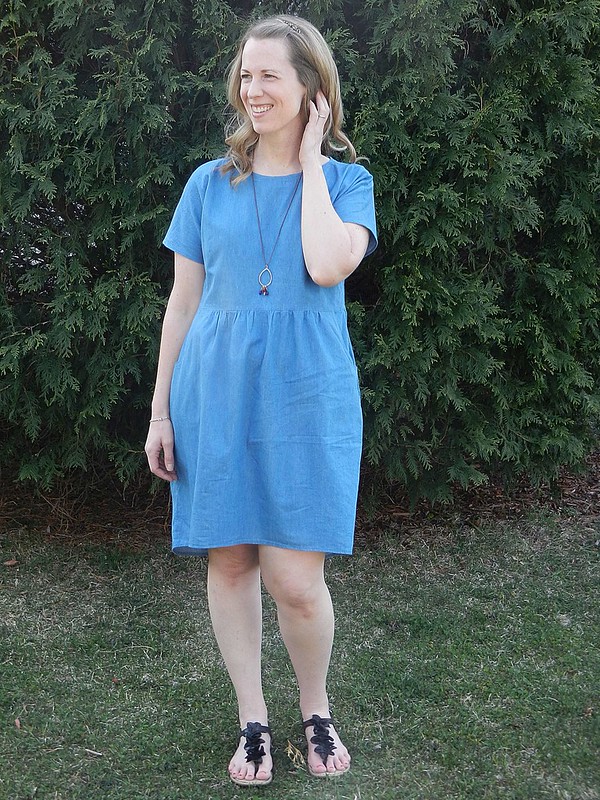 The one thing I didn’t notice in my muslin was that the armholes were too low. Once I got the dress constructed and the skirt was attached I realized that they were so low that I couldn’t raise my arms without the whole dress lifting up. Also, the darts seemed too low. Obviously I wasn’t exactly focused on everything I should have been when I tried on my muslin! The best solution to fix the issues seemed to be to sew the shoulder seams with a deeper seam allowance to pull everything upward. The problem with this is that I followed the order of construction in the pattern, which has you finish the neck band immediately after sewing the shoulder seams. 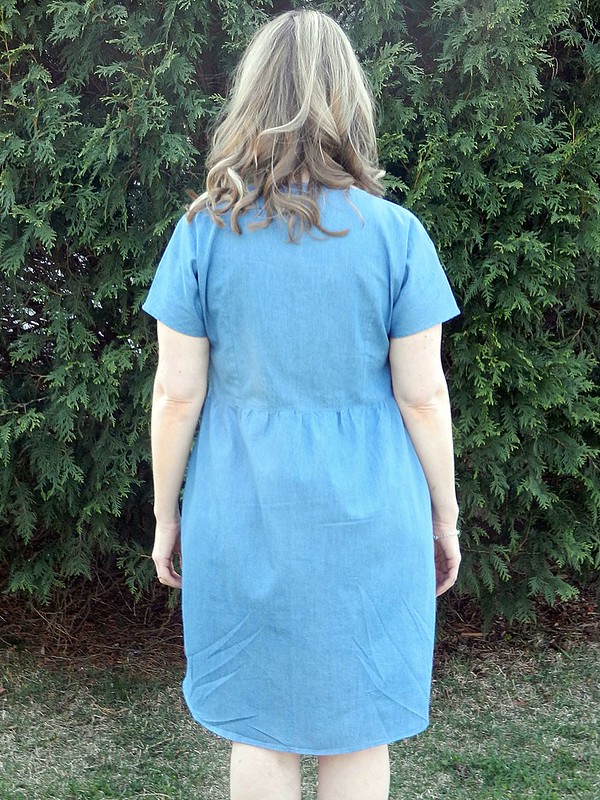 Before I did a bunch of seam ripping I basted a deeper seam allowance at the shoulders to be sure that was actually the best solution to fix the problems.  And of course it was. It was annoying to have to take out the whole topstitched neckband, but it resulted in a much better fit. 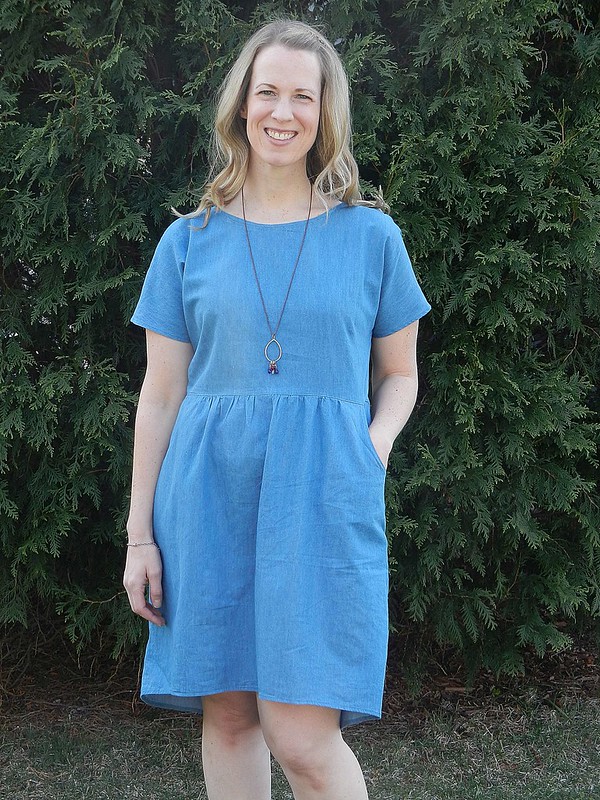 I completely love the finished dress.  I made it from a lightweight denim from Joann fabrics. It is one of those dresses that is so easy to throw on and will be super comfortable in the summer heat. It’s loose but also has enough shaping that I don’t think it ended up looking like a sack after all. It’s also a really quick sew, provided you don’t have to do a weird amount of unpicking. 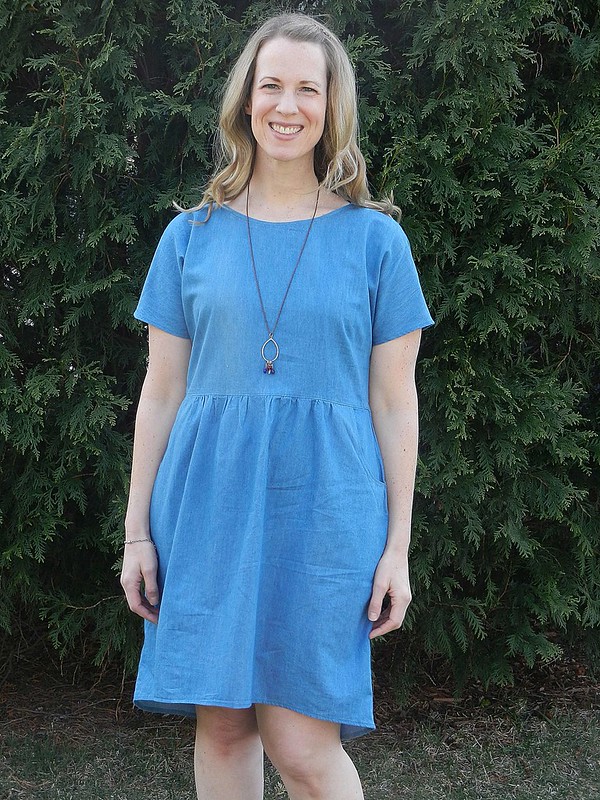 My modification to the shoulder seam allowance resulted in the neck being a little bit higher than designed. I am a fan of high crew necks so I’m happy with that. I am glad I lengthened the bodice since my mods at the shoulder took out just about the same amount from the length, just in a different place. It brought the waist back to where it was on the original pattern, which I think ended up being fine. 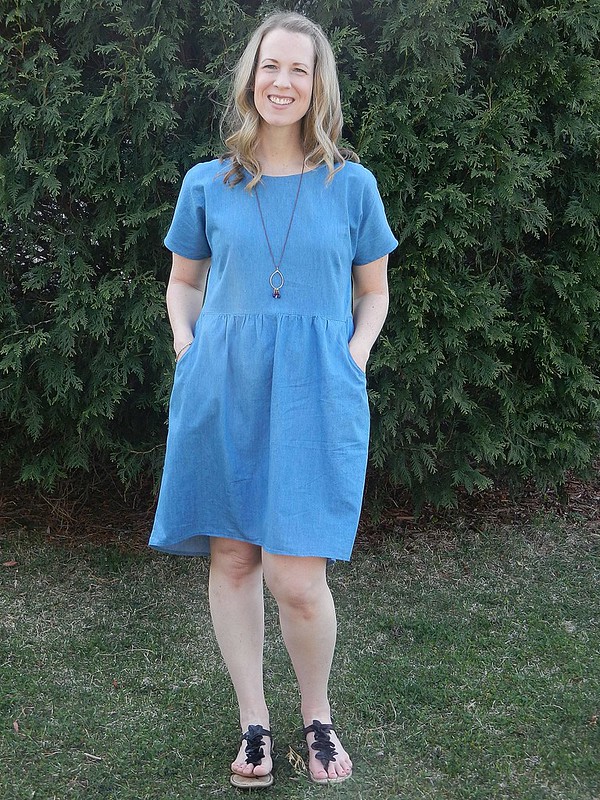 Now that I’ve really figured out my fitting changes I am excited to make another Fen! I think the shirt tail hem version is next and I am dreaming of this dress made up in double gauze. This definitely feels like one of those pieces that I will reach for whenever it’s clean so it’s probably a good idea to have two! I’m curious, when you sew a new pattern you love is your gut instinct to make the same thing again right away or move on to something else?

Disclaimer: As part of the Indiesew blogger team I was provided with the Fen pattern. All opinions are my own.