Yesterday we had an unseasonably warm, sunny day so we ventured outside onto the front step to take a few pictures of this seasonally inappropriate outfit! I have been wearing my black Luna pants so much that on New Year’s Eve I decided to make myself a new pair from some rayon challis that I bought a while ago when I was pregnant with Caroline. 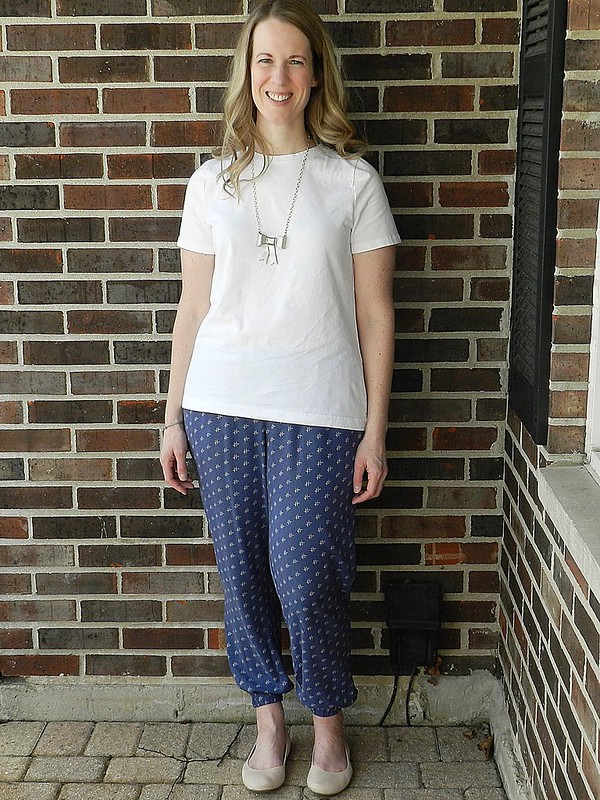 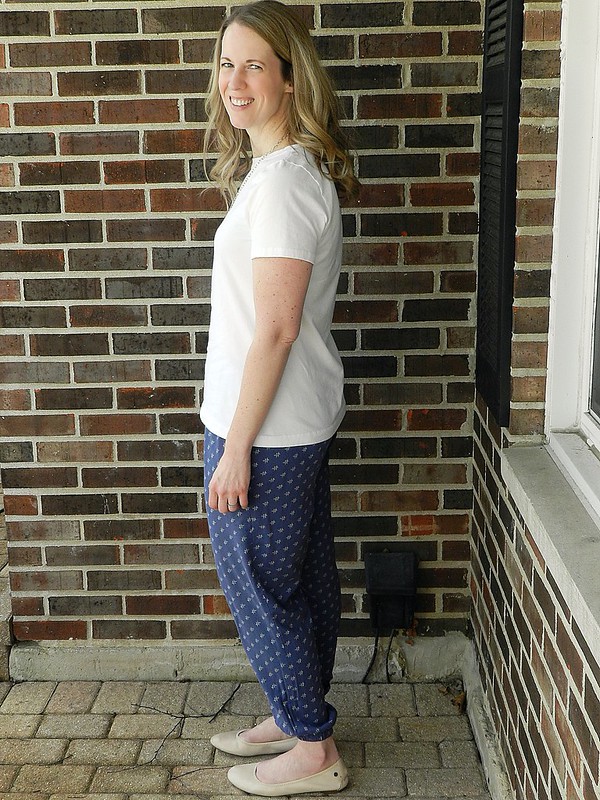 The thing I didn’t really consider is that rayon challis is really thin and these might not be the best choice for the middle of Winter. I have worn them a few times when it hasn’t been completely frigid, but I know I will wear these a bunch in the Spring and Summer. I set out to make these the same size as my last pair, which was cut between the lines for size Large and X-Large. I discovered that my pattern wasn’t cut that way after all. I had cut the back piece of my black pair between the L and XL but the front was cut on the size XL. So this time I cut the front between the L and XL. The difference wasn’t super noticeable but I like how these are just a tiny bit smaller than my other pair. 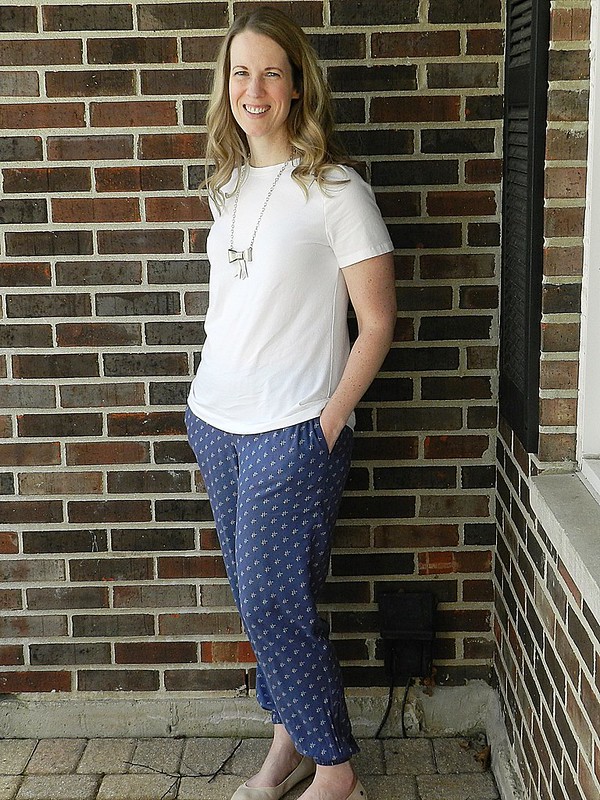 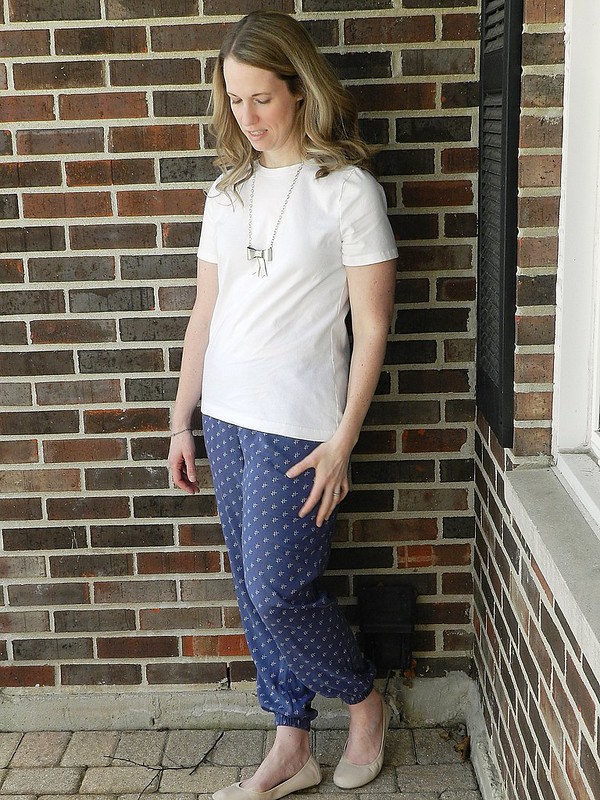 I struggled a little bit with the pockets on this pair because of the shifty nature of the rayon fabric. The pockets are attached to the outsides of the leg pieces with a smaller seam allowance than what is used to sew the outside seam of the legs. This results in the pocket seam being recessed a little bit and I think it’s a great detail on these pants. The rayon was shifting around so much that one of my pockets is not as recessed as the other one. It’s not a big deal but it may be time for me to buy some spray starch to help when using slippery fabric. 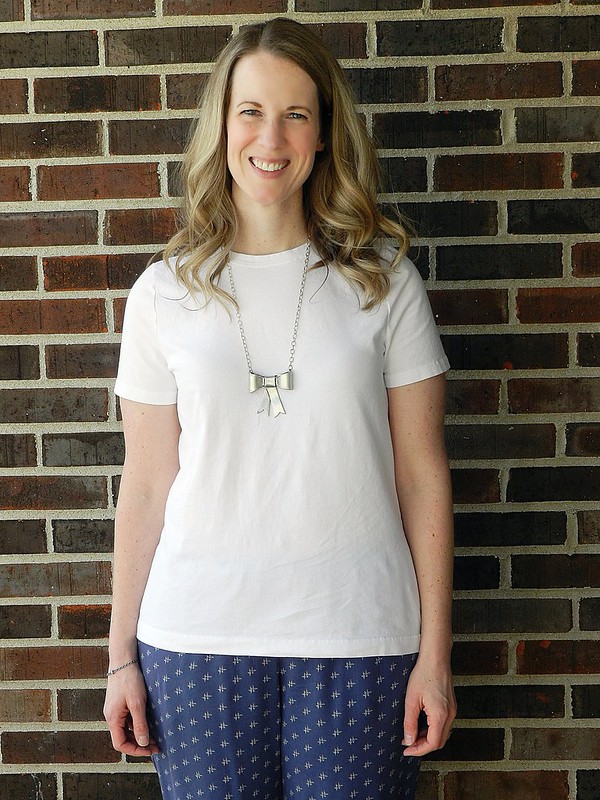 My t-shirt is the Lark Tee from Grainline Studio. When the pattern was released I was sort of skeptical that I needed another t-shirt pattern. I have the Union St tee pattern, the Plantain tee, and the Sewaholic Renfrew (which I haven’t even made yet!) But I was very taken in by the boatneck version and somehow convinced myself I needed the pattern instead of just modifying the neck on one of my other patterns. 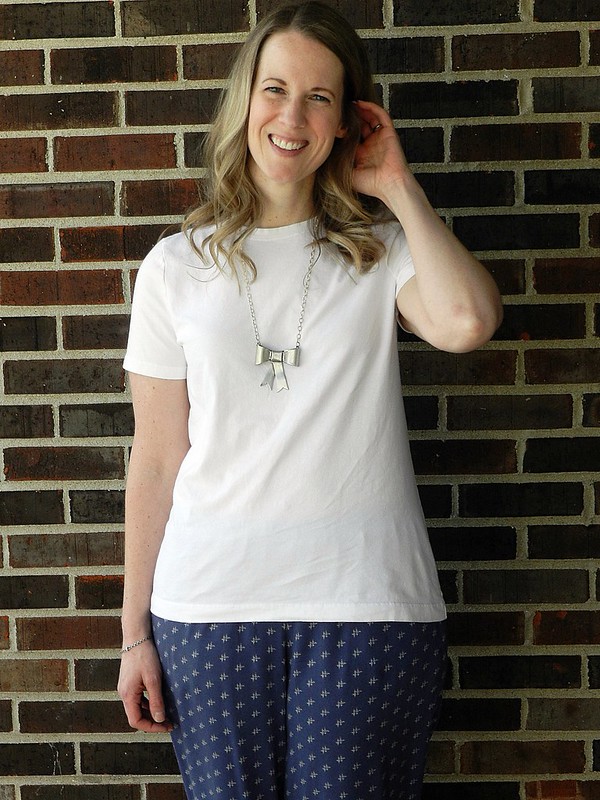 I finally got to sewing up my first Lark tee last week. I made a green cap sleeve version to wear under my Morris blazer. Based on that initial tee I made a few changes to the pattern before I made this rather boring, but super useful white t-shirt. The body of the pattern runs long. I compared the pattern pieces to my favorite t-shirts and decided to shorten it by 2″. On my first tee I shortened at the lengthen/shorten line, but the hip curve ended up too high and I had to straighten it before I hemmed the shirt. This one I shortened at the hemline and it’s much better. 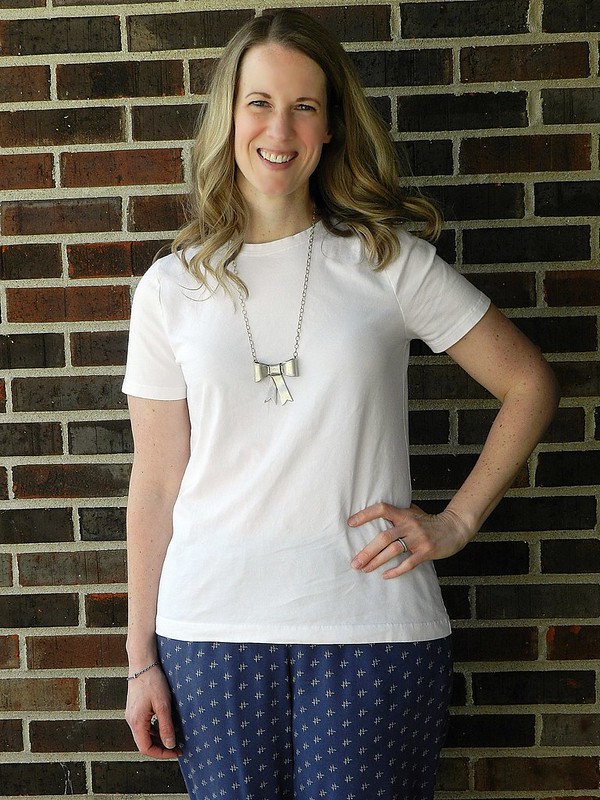 I also found I needed a  3/4″ forward shoulder adjustment (which is standard for me and I should have just done it to the first one) and adjusted the sleeve cap using this great tutorial. I cut a size 10 at the bust and graded out to a 14 at the hips. This is the short sleeve option but I shortened the sleeves by 1″. When I finished my green cap sleeve version and this version I was initially a little bit meh about the fit. I wasn’t loving the fit through the shoulders but after a trip through the wash I totally love how they both fit.

I feel like I’ve unlocked some sort of major sewing achievement now that I can sew a basic white t-shirt. The fit of this top is great on it’s own and it’s great as a layering piece under a cardigan (which is how it will be worn this winter.) I just ordered 2 more yards of this white jersey so I can make a few more and retire some of my old RTW white tees. 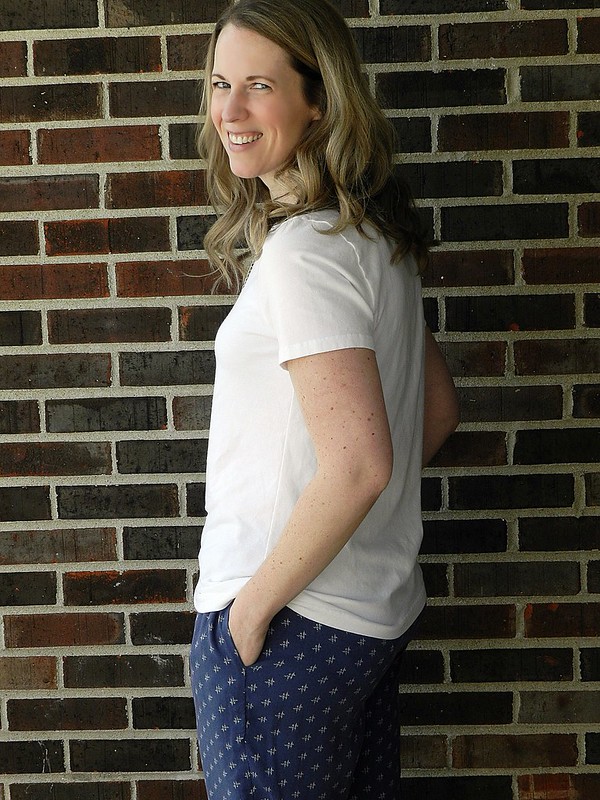 So, that was an awful lot to say about a basic t-shirt, but I really like this pattern and I’m excited to make a long sleeved boatneck version soon. Has anyone else sewn the Lark tee and do you think I’m crazy for buying multiple basic t-shirt patterns?

21 thoughts on “Rayon Luna Pants and a Lark Tee”